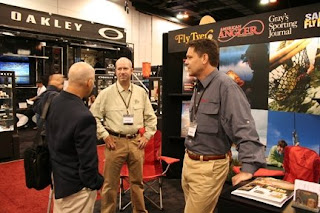 No more than just a few hours after getting back from an exciting Alaska trip did I get voicemails "Hey I hope Alaska was good to you, interested in hitting up the Fly Fishing Show events this week?"

You know where my priority is after a week in Alaska I get back and thrown into the Fly Fishing retail mix for a few days. Can't complain and after getting another invite for attending the Fly Fishing Video awards I was all over it. Could you really pass up free drinks, free food, chatting it up with some important players in the industry and a chance to work on a few more free trips if possible, oh yeah!

Top Videos of the Night
Worldangling Group won with Slam,
Into The Backing also got some attention with wild Salt and Freshy action
Brian O'keefe's Bass film also got the juices pumping for some Bass action as well
Mikey Wier's Taimen chase was incredible and Jeff Courier also assisted in the making


The Video awards night couldn't have been better. We started the evening at a pre-party having drinks with a few people before running into a new fishing friend. Not your average fisherman or one who travels infrequently, Tom Lewin from Frontier Fly Fishing is quite the opposite. After having about 3 beers and comparing fishing stories with this guy, I don't even come close in my travels! He helps to arrange trips around the globe from the Seychelles (my favorite of his because it was from a Jose Wejebe Spanish Fly episode last year that I knew about very well) Tom was the lead in that journey, to his Patagonia operations and lastly to a new favorite for years to come hopefully in Havana, Cuba. From 40lb Permit to 18lb Rainbow's on a 5weight, Yes Tom is my new best friend! I was also fortunate enough to run into Conway Bowman and talk sharks a bit, Mark Lance who also just returned from Alaska not long ago to compare notes and to lightly touch on a few pictures of mine which are never in his amazing category of photography. His wife Sharon and their friends at the event from Trout Unlimited National also provided interesting conversation about recent conservation actions ongoing back in DC. Kelly Galloup whom is always a character and fun to chat with stayed to busy talking amongst the masses to catch up with this time darn it. I also was able to catch up with fellow Carper Sabrina from Sheloveflyfishing and my pal Kyle from a newly popular site FlyFishMap and Compleatthought for a drink or two so the night definitely provided a ton of entertainment. No way I could I make it to the Simms party the following night, I needed some much needed rest!

The Retail Show also gave me a sense of excitement, all these goodies available and it was time to do some serious talking and smoozing! I've been lucky enough to attend the event for a number of years now and though there is talk of a move to another city/venue. A recent Charlie Myers article and chatter at the show, most of those I talked with stated they prefer to stay and any change won't proof anything but to be a pain. Dan Narsete from the Fishing Show "Field Day" got me in on Saturday and it was time to get going. It didn't take long to run into a few familiar faces again like Brian O'keefe from Catch Magazine, to tell him about my recent Alaska trip and to see where he's off to next, lucky dawg!!

Another fellow Georgian was Zach Matthews, most know him from his site Itinerant Angler, or from his writings in Fishing Mags and Midcurrent. It was good to catch up with him and to talk about his recent trip to Yellowstone NP catching lot's of Cutthroats. Something about passing by the Tibor and Abel booths just pull me in! Yes I'm drawn to em and am always looking at the new stuff as well "brownnosing" my butt off for some rare discount with them even if it's a blemished Backcountry model....I don't care! All in all a fun weekend and lot's of swag to show from the guys from Mustad, Rainy's, Scientific Anglers and a from a few favorite rod makers.

Congrats again to the boys at Scott Fly Rod, they got the gold from their Scott S4s - 2010 Dealer's Choice for best new rod of 2010.

Wish we had it here in Chicago to enjoy. Oh well it sounds like they might be moving from Denver is that true?

Yeah lot's of chatter about the show this year. Hard to say what will happen but I hope it stays here in Denver. Not sure how that will work with the show being held in July in the desert, definitely not much fishing going on there if that happens!