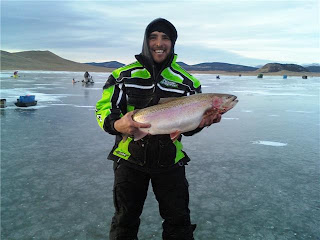 Antero Reservoir is Hot with action again...Well it's not a Good Thing!
Huge Rainbows caught recently at Antero

Why? Well with no catch and release policy in place and you can't really catch a huge trout, take a few pics, drop it on the ice than discard to hopefully swim away. Another, in case you want to know, is because we are in the rebound stage after a kill off last winter and from all that died from poor angling techniques last Summer...I really don't like seeing this at all!!!!

Charlie Myers comments
It’s nail-biting time for those of us who last year became addicted to the rejuvenated Antero Reservoir. Something about really big fish on light tackle does that to a fisherman.
Almost everyone knows by now about the severe winter conditions that created oxygen deprivation for long months. When the ice finally cleared from the lake last week, observers spotted a large number of dead trout, mostly collected near the dam. Question is, how many survived.

“We know we have a lot of dead fish. What we don’t know is how many are still swimming in the lake,” observed Greg Gerlich, Colorado Division of Wildlife state fish manager.
We’ll get an indication sometime next week when DOW personnel set several nets at key locations. Biologists chose to delay a few days to let the lake settle and to allow trout time to quite literally catch their breath and become active.

While anglers immediately find trout on the prowl at deeper neighboring lakes such as Spinney or Elevenmile, their cousins at the very shallow Antero almost always are lethargic for several days from oxygen deprivation. So Antero enthusiasts are left to cross their collective fingers and toes for the next few days until a more definitive report is delivered. I’ll be watching anxiously.

From High Beam fishing article
If trophy trout at Antero Reservoir aren't rationed more conservatively among anglers, the increasingly popular but increasingly unproductive fishing hole near Hartsel might be doomed to mediocrity - or worse.
At least that's the worry - reinforced by surveys of anglers and cipherings of fish managers - driving a proposal to trim the number of big fish that anglers would be allowed to keep at Antero. "Yeah that fish will Live after a pic"

Yeah they definitely need to do something about that, not good for this Summer if all these big trout are caught