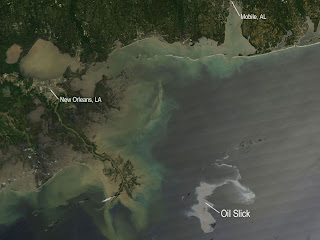 Not Looking Good For Our Louisiana or Florida Friends!

A huge wind-driven oil slick bore down on the U.S. Gulf coast on Sunday, threatening an environmental catastrophe, and the Obama administration heaped pressure on BP Plc to halt the uncontrolled spill from its ruptured Gulf of Mexico well. Since the explosion and sinking last week of the Deepwater Horizon rig, a disaster scenario has emerged with hundreds of thousands of gallons of crude oil spewing unchecked into the Gulf and moving inexorably northward to the coast.

The estimated amount of oil spilling in an underwater leak from last week's oil rig explosion in the Gulf of Mexico has increased to 5,000 barrels (200,000 gallons) a day, five times more than what was originally believed, a Coast Guard official said late Wednesday.
To watch a detailed report of the oil spill click here, the fishing Industry will see an affect from this for years to come no doubt about that! Regardless of the time, money and apologies from BP regarding this Monster disaster, the Environmental damage done already and what's instore for decades will come are far more deadly than what's done already. Don't also forget the lives affected from this including fisherman, area restaurants, jobs, tourism money and more! Definitely a huge disaster thanks to BP and stupidity on how to stop this from getting worse.
As far as Florida in it's path, well among the wildlife that could really beaffected by the oil spill will be our beloved Tarpon, CNN affiliate WPLG-TV reports. The tarpon, which grow up in the Gulf and migrate could be right in it's path. "The entire path of which they are operating is under assault, if you will," said Gerald Ault, a marine biologist who studies tarpon migration at the University of Miami's Rosensteil School. "The timing, really, for that animal probably couldn't be any worse because this is right in the middle of peak spawning period."
BOYCOTT BP Oil and sister company Amoco

No relief in sight it seems for BP, those idiots better find a way to fix this problem!

Not too happy about this mess they've created and still trying to figure out what to do as the BP VP of exploration said on the news this morning.

I just updated to the right on my blog a daily update on where the spill is currently at, check it out