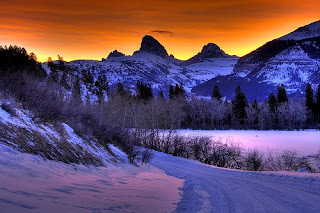 The first half of our discussion will concentrate on the environmental factors that influence and help dictate which techniques and tactics you'll want to utilize while fly fishing in Jackson Hole. It sets the stage for next months column which will focus on specific techniques and strategies I've found useful over the years.In brief, most Jackson Hole fly fishing situations share three common characteristics:First of all, the vast majority of the time you'll be fishing for the same sub-species of trout, the Snake River Fine-spotted CutthroatSecondly, the rivers you'll be fishing are almost all freestone streamsFinally, similar environmental conditions exist throughout (i.e. climate, water temperature gradients, predators, sparse hatches, food sources, etc.)To sum it up, you've got the same type trout residing in similar habitat (freestone streams) and influenced by similar environmental conditions throughout Jackson Hole. Is it any wonder a common theme is manifest in our approach to fly fishing the region? In other words, what works on one river or stream will probably work on another as well.The TroutEach species of trout share behavioral traits which help differentiate it from other species of trout. Browns are wary, rainbows jump and Snake River cutts are mean SOB's. They are very much a product of their environment. To survive they must be aggressive and opportunistic. As you will see, this has far reaching implications for the Jackson Hole fly fisher.Another very endearing quality of the cutthroat trout is it's willingness to surface feed. Of all the species of trout, none is more likely to rise to the top of the water column for a meal than the cutthroat. When in cutthroat country you can almost always fish with dry flies if you choose. Other methods will certainly work too, and at times be even more effective, but if you are a dry fly die-hard you'll usually find enough action to keep you happy.

The HabitatFreestone streams in Jackson Hole derive their water supply (primarily) from the snowmelt of the surrounding peaks. They support less vegetation and insect life than a typical spring creek and can exhibit widely divergent personalities at different times of the year. During run-off they are high, off-color and for all practical purposes, unfishable. This annual scouring does, in large measure, prevent vegetation from taking root as well as limiting insect numbers.Later in the summer, especially in low water years, freestoners can be quite tame with a correspondingly significant reduction of trout holding lies.Incidentally, Jackson Hole has many spring creeks. However, the vast majority of them are located on private property.The EnvironmentVarious environmental conditions (including the habitat, as mentioned above) have significant influences on trout behavior:Climate: Long harsh winters and a long run-off season combine to create a relatively short growing season for the cutthroat. Consequently, cutthroat trout must be more aggressive and opportunistic in their feeding patterns than trout living in more moderate climates.

Factor in sparse Jackson Hole hatches and this becomes even more true.Water Temperature Gradients: Here we are referring to daily fluctuations in water temperatures and how quickly, or slowly, they occur. Many fishermen, including the author, believe that steep temperature gradients trigger trout feeding behavior. In other words, gradients which warm (or cool) through a greater range of temperatures (say 50˚ - 62˚ as opposed to 55˚ - 62˚) will have a greater influence on feeding behavior during the time period in which the temperature change takes place.In many parts of the country, the best fishing takes place during the cool mornings and evenings because midday temperatures get too warm. In Jackson Hole, the reverse is true. Mornings and evenings are often too cold with the best feeding activity taking place when the water warms in late morning and early afternoon. In either case, whether the water temperature is warming or cooling into the optimal feeding temperatures, the best fishing will take place during the transitional periods.

To bottom line it for the aspiring Jackson Hole fly fisher, the best fishing of the day normally occurs at midday, between late morning and late afternoon. A typical summer day will see fishing activity pick up around 10:30 or 11:00 am and begin to slow down around 4 or 5 pm. If water temperatures warm too much during this time period you will often see a lull in feeding behavior around 2:30 or 3 pm, to be followed by an increase in feeding as the river begins to cool.Predators: In New Zealand, trout have no natural predators other than man. Huge browns can be spotted holding in open, crystal clear water. Such is not the case in Jackson Hole.In Jackson Hole it seems as though everything that moves is trying to make the cutthroat it's next meal, or so it must seem to the trout. Trout predators in Jackson Hole include, but are not limited to: herons, pelicans, larger trout, mink, eagles, osprey, otters, bears and man.Needless to say, that's quite a list. Herons, pelicans and larger trout prey primarily on small trout. Mink, eagles and osprey focus on the medium size range while otters, bears and man can take on the largest trout with relative ease. If that weren't bad enough, huge lake trout in the 35 - 40 pound range have been known to attack and kill trout weighing 5 pounds or more.With such a lengthy list of active predators, it's not hard to understand why you don't see Jackson Hole cutthroats holding in open water. Snake River cutts had better hide or else! Cutthroats will use the following forms of structure to seek shelter: deeper pools, rocks, undercut banks, riffles, and downed trees.Riffles provide so-so cover at best. Abundant food and oxygen will

Can't wait to get back up to the Tetons to fish again this Summer.