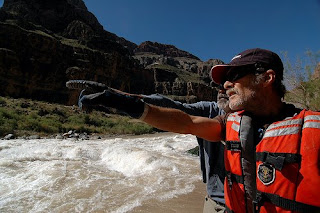 High Snowpack, Hot Temps Wash Out Many Western Rivers
More on FlyFish Addiciton site also
Arkansas isn't the only state that has struggled with too much water this spring. Places like Washington, Oregon and California have seen unusual winter precipitation turn into a torrent of runoff as temperatures rise. But one look at NOAA's Western Water Supply forecasts will give you a sense of perspective. Except for portions of southern Colorado and Oregon, no place is getting hit as hard as western Arkansas.
Still, high waters in Yosemite led Washington Post writer Angus Phillips to spend his days waterfall-watching rather than fly fishing. That in turn "exposed" some of the dangers of hiking in an overcrowded park: "Halfway up Willow Creek, bushwhacking through the scrub oak and pine, we rounded a bend to find a hugely fat, tattooed man stretched out on a rock, stark naked and sunning himself. The women recoiled in mock horror."
By Marshall Cutchin at

Great Map of the West and areas with snowpack levels listed
Posted by Troutdawg at 11:33 PM
Email ThisBlogThis!Share to TwitterShare to FacebookShare to Pinterest