Millions of Dead Fish Show Up at a Los Angeles Marina 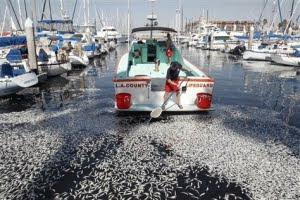 An estimated 1 million fish turned up dead Tuesday in a Southern California marina, creating a floating feast for pelicans, gulls and other sea life and a stinky mess for harbor authorities. Thers's going to be some one heck of a buffet frenzy the next few days!

Many Biologists have tentatively concluded that the fish died from oxygen deprivation after being driven by a storm into a closed-off pier area, California Department of Fish and Game spokesman Andrew Hughan told Reuters.