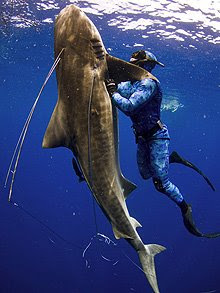 Wild Shark Attack Story in the Gulf of Mexico!

Craig Clasen went head to head with the aggressive predator, shooting it seven times with a spear gun, when it was about to attack another fisherman. Mr Clasen was hunting yellow finned tuna with his friends Cameron Kirkconnell, photographer D J Struntz and film maker Ryan McInnis in the Gulf of Mexico when the close encounter happened.
The group were about to leave the deep waters south of the Mississippi River's mouth, when Mr McInnis found himself alone in the company of the tiger shark. Mr Clasen, 32, grabbed his spear gun and swam to help his friend, who was being circled by the giant predator.

Posted by Troutdawg at 12:50 AM
Email ThisBlogThis!Share to TwitterShare to FacebookShare to Pinterest
Labels: mako shark fishing on a fly, shark fishing in florida, spearfishing

Hi, it's a very great blog.
I could tell how much efforts you've taken on it.
Keep doing!

Thanks and glad you're enjoying my blog! Always trying to improve it so it's getting better day by day~