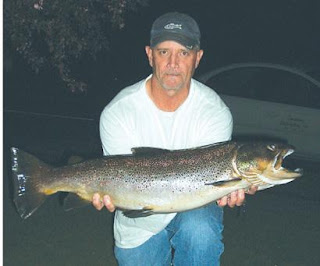 Butte man lands Big Hole lunker Monster brown
By Justin Post of The Montana Standard - 06/16/2009
Bob Kingston and Gary Keeler of Butte bought their first raft as teenagers and have been floating the Big Hole River ever since.Now in their mid-50s, the longtime fishing buddies have their best fishing story yet.On Friday evening, Kingston caught what appears to be the elusive, monster brown trout that has been the talk of many area anglers in recent years.The beast measured 35 inches and made its way to the raft cooler following a roughly 30-minute battle between man and fish, said Kingston, who is having the trout mounted. The fish weighed slightly over 20 pounds after it was wrapped in a damp towel in preparation for the taxidermist."He just kept going wherever he wanted," he said of the fight.Kingston caught the fish with a five-weight fly rod rigged with eight-pound leader and two stonefly nymphs above Mallon's, west of Wise River, after launching from East Bank. "I was just throwing my fly right by the bank and it gobbled it up," he said.
More Here
Posted by Troutdawg at 12:48 AM
Email ThisBlogThis!Share to TwitterShare to FacebookShare to Pinterest
Labels: montana fly fishing, montana record brown trout

Big fish indeed and hopefully one day I'll be lucky enough to see one like that one!!

One heck of a great brownie, wish it was still in the river though!

Yeah there is a big poll taken on one of the fishing boards about that very same subject. I for one would have put it back, than again if I ever caught one that big my head would be so distorded I probably couldn't think straight anyway to make a decision!

Just in case any anglers out there are wondering, most taxidermists do not need the fish to make a good quality fiberglass mount these days. A fiberglass mount almost always lasts longer and ends up looking better with age than a "original" mount. Take photos from every angler -- both sides, front, top, bottom, etc. and get the length and girth and your mount will be great.

I feel the same way Garry. Again I guess it's up to each persons descretion as to what they do and each situation but with today's taxidermy technology and simplification with that method it would be the way I would go to keep a grande life living in the water and still cherish and wild memory of a large fish for years to come!

Man that was a Hawg!