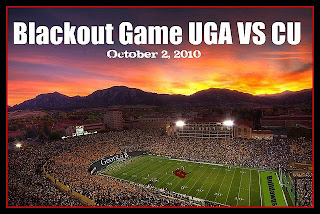 To Fly Fish or Watch College Football? This Weekend Boulder Here I Come

(In Memory of the Dawgs loosing on this faithful night, the only good thing is that maybe our coach finally hits the road now)
Most who know me know that Fly Fishing reigns supreme for me during the year "but" during College Football season my allegiance kinda goes out the window and I've been known to miss a day out on the water to attend or watch a big game. The game can be summed up as a battle of the Mascots since UGA and Ralphie have been ranked #1 many times over and over...who will be the victor in 2010? I ran into Vic Lombardi, Denver's local Sportscaster and talked about the big game. When asked about his thoughts on the game,Vic said he was a little unsure, both have a lot to gain but not sure how this one will end since both having issues. The winner....perhaps Georgia but not by much. Growing up in College Football's meca of the South -sorry Big 12, the SEC is still the top dog most years in College football and after spending much time in Athens, Ga my Bulldawgs outways any trout to be caught most Fall Saturdays. However this year is a bit different, both Georgia and Colorado both stink and my allegiance is sorta a wait and see on what Hatches are going off vs watching my pathetic Dawgs playing as of lately.


The Georgia Bulldawgs play the Colorado Buffaloes for the 2nd time and after a barn nurner in Athens 4 years ago this one looks to be another tight one. With much on the line for both teams, fans of each anticipate a W but than again both teams have fans on the fence about their coaches.
With Georgia I stand with many dawg fans in that going 2-7 in the SEC the last few years, a slipping dominance in the SEC and too many off the field issues are leaning towards a fired coach by the end of 2010.

The Colorado Buffaloes are in the same boat, after a few years of some very poor outcomes, the Buffalo fans have become use to loosing under Hawkins and can't wait for him to leave Boulder! Wait....he's won a few close games and if they somehow beat a down and out Bulldawg program, that could save his job? So the big question is...do you want CU to win and soon become bowl eligible perhaps or loose and finish the season hoping Hawkins finally ends a sour taste in the mouth of may true CU fans? Colorado has not won back-to-back games since opening the 2008 season with three straight wins. The Buffaloes had a bye last week after notching a 31-13 win over Hawaii on September 18th. They'll open their Big 12 schedule next week against Baylor. Meanwhile, the Bulldogs find themselves in a rare position as they've lost three straight for the first time since 1990. They are also 0-3 in the SEC for the first time since 1993. Last week, Georgia suffered a 24-12 loss at Mississippi State. In the only prior meeting between these two schools, Georgia rallied for a 14-13 come-from-behind win in Athens during the 2006 season.

Georgia's offense was stifled by Mississippi State in its most recent outing, mustering only a pair of field goals until the final minutes. Those field goals were the end result of the Bulldogs' only two trips to the red zone, as they weren't able to put the ball in the end zone. Aaron Murray completed 18- of-31 passes for Georgia, finishing with 274 yards and a touchdown. The run game was virtually nonexistent, with Washaun Ealey registering a team-high 36 yards on 10 carries. Through three games, Ealey is averaging 66.0 yards per game on the ground and has found the end zone only once. Murray is completing 61 percent of his passes while throwing for 219.8 yards per game, with five touchdowns and two interceptions. His top target has been Kris Durham, who has caught 17 passes for 324 yards and a TD.

Defensively, Georgia's strength is stopping the run, which should present a stark contrast from the Hawaii run defense that Colorado faced in its last outing. The Bulldogs are allowing 108.8 yards per game on the ground, which ranks 30th in the nation. However, they had some trouble containing Mississippi State quarterback Chris Relf, who has the ability to hurt defenses with his legs. In that game, Relf threw for 148 yards and two scores, and he also gashed the Georgia defense for 109 yards (5.4 ypc) on the ground. MSU tailback Vick Ballard added 64 yards and a TD on 13 carries (4.9 ypc). Look for Georgia to refocus on clamping down against the run. That starts with linebacker Akeem Dent and strong safety Bacarri Rambo, the team co-leaders with 30 tackles apiece.

Posted by Troutdawg at 12:14 AM
Email ThisBlogThis!Share to TwitterShare to FacebookShare to Pinterest
Labels: bulldawgs and buffaloes, college football and fly fishing, CU buffs and georgia, georgia bulldogs and colorado buffaloes

I can tell you that here in Dawg Country, just 30 miles or so from Athens, we are already shifting our focus to the Atlanta Falcons and fishing.

Go Dawgs. But, anyone could beat them right now...:(

I don't blame you, what a bad year so far and after a rebuilding year last year, we never rebuilt? Hoipefully this weekend provides some entertainment.