Ryan Davey the World Angler and Vincent Su with the Revolutionary 720 Vise! 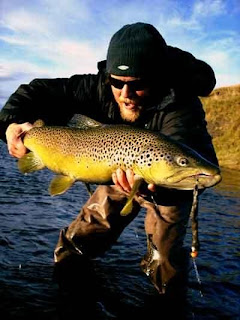 The Original Trout Bum Traveler and New Vise Creator Vincent Su
Continuing the theme for pimping out my buddies websites week
I met Ryan Years ago and all it takes is a few minutes to learn that this guy lives the life of a fly fisherman! Though I haven't been able to escape work for one of his many Distant trips, thanks for the past invite BTW; one of these days hopefully I'll be able to make a far away trip with you or chase some Oregon Steelhead.
Ryan's passion for fly fishing, adventure, and conservation have taken him to the far corners of the globe. His resume is as diverse as his travels, ranging from IBM and Microsoft to working at a winery in Tasmania, building a web design business, being employed as a deckhand on marlin hunting charter boats in New Zealand and Australia's Great Barrier Reef, assisting in tiger research in Nepal, white-water raft and fly fishing guiding, freelance writing and photography, and building an adventure media company from scratch. Ryan was one of the founding partners of the Angling Exploration Group, known in the film industry and around fly fishing circles as AEG Media. Checkout his Worldangler site for some great adventures and Big fish pictures!
__________________________________________________
I've known Vincent for years and besides fishing with him many a days out on the water, I'm always impressed with his ability to catch trout. One thing is certain though when it comes to him....he can tie some flies! Not only does he have the ability to tie some great patterns but also his innovative knowledge which has developed into some creative vises in the Market and is the talk of the town.
Vincent is the originator of the 360 & his latest, the 720 vise shows just how easy it can be to tye flies with these vises. Vincent has demonstrated his tying skills at many regional fly tying events, including the Denver Fly Show,West Denver's TU Tying Clinic and most of Denver's fly shops. Ground Breaking New 720-degree True-Rotary Fly Tying Vise is the New Vise Vincent has come up with and has been getting great reviews so far!
Fly tying vises have evolved from stationary to rotary to true rotary and now the break through is the true rotary on two axes. 720 ViseTM indeed provides a new dimension for your fly tying pleasure. 720 ViseTM is packed with features that set new standards for the industry. For example, a carefully engineered gallows system. The vise makes tying parachute and extended-body fly patterns much easier.
Vincent's Site
and Information on how you can get one of these sweet Vise's That 720 is the Bomb! I've read about that, I may have to see one up and close to see what all the fuss is.