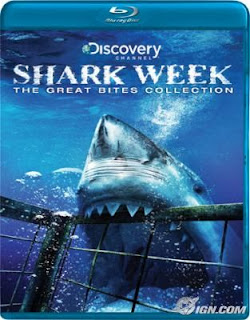 With All The Chatter Lately About Sharks, What Better Time Than Now For Shark Week
Shark Week Link for Episodes and Schedule


Discovery Channel's annual must-see event, Shark Week, is back this summer with seven premiere programs that spotlight the sea's apex predator, including two specials hosted by Mike Rowe (Dirty Jobs) that profile the people whose jobs are to work with sharks. Airing Sunday, August 2 through Friday, August 7 at 9 p.m. ET/PT each night, Shark Week is produced in conjunction with leading shark researchers around the globe, and provides viewers with valuable knowledge about the behavior and characteristics of this diverse and majestic species.

Shark Weekhost Mike Rowe introduces each night’s premiere special, and also hosts the Sunday, August 2nd two-hour kickoff special Dirty Jobs: Jobs That Bite, and the Friday, August 7 one-hour special Dirty Jobs: Jobs That Bite Harder. For both, Mike travels around the globe to do jobs that really "bite," alongside the dedicated men and women who work with the ocean’s most efficient predator. From performing shark necropsies to tagging and tracking the migration patterns of sharks, and testing shark repellants and chain mail, these jobs help better our understanding of shark behavior.


SHARKS IN THE NEWS
Anatomy of a Great White SharkHow Bull Sharks WorkHow Sharks Are Born
Worst Shark Attack EverShark Myths: Reeling in the Big OnesPrehistoric Sharks: When Megaladon Ruled
Sign up for our newsletter and get $5 off Shark DVDs.

Posted by Troutdawg at 12:11 AM
Email ThisBlogThis!Share to TwitterShare to FacebookShare to Pinterest
Labels: big sharks to go after, mako shark fishing on a fly, shark fishing, Shark week, sharks in the news, top shark fishing areas