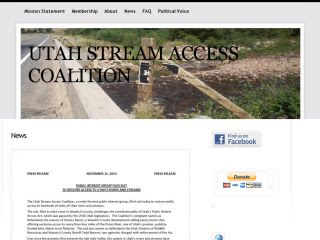 Late Friday we received word that the Utah Stream Access Coalition had filed a lawsuit claiming that the Public Waters Access Act passed through the 2010 Legislature was unconstitutional. Among the groups listed in the suit: Victory Ranch; the Utah Division of Wildlife Resources and Wasatch County Sheriff Todd Bonner. Here's the story the Tribune broke on Friday.