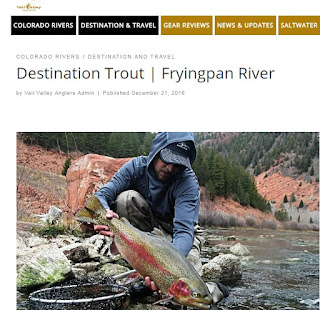 What makes it special?
Mysis Relicta is a small freshwater shrimp that fishery managers introduced into reservoirs throughout the west during the 1950s-1970s as a food source for trout and Kokanee (land-locked salmon). The resulting devastation from introducing a non-native, such as the Mysis, was unpredicted. The Mysis fed heavily upon the same zooplankton in the reservoir that juvenile salmon and trout needed as a food source. However, the tailwater section of the river benefited from this misguided management.

Fryingpan Trout:
Trout in the Fryingpan River feed heavily upon the Mysis shrimp that flush through the bottom of the dam. The top two miles flowing out of the reservoir hold the highest numbers of Mysis in the water column, where giant trout swell under the high protein diet and end up looking more like Olympic weightlifters than beaver pond bookies.
Article Link