Big Trout on the White River in Arkansas! 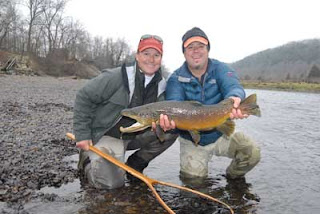 World Record Trout on The White River, This is The Place!

You want big trout? Well what better place than the White River in Arkansas and if you have the time, don't forget about the Little Red River at night. My pal John Wilson is the go-to guy when it comes to big fish in those parts so "When" you make your trip that way, because I know eventually you will; Call John and get onto some Monster Brown Trout! He always helps me out when I'm out for Big fish at night and looking for various tactics to try so thanks a ton.

Frank Smethurst, a fellow Georgia/Colorado resident and UGA alumni, has been hitting the road again this past year for his show TU "Trout Unlimited's On The Rise" and after my last conversation with him a few weeks back he still get's bright eyed when I talked to him about his Beast Brown, nice going Frank and can't wait to see on you on some local waters again here in Colorado when you're not traveling or shooting videos. Congrats also on your newborn as well. TU is still important to me seeing how I spent years as the Activities/Programs director here at the Denver Trout Unlimited's Chapter, so checkout his episode of the White River Brown if you can. 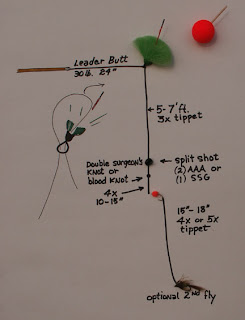 Yes most of you know how to use this simple rigging technique, how it works, simple placement of flies, split shot, knots and all but for many out there; this can be a challenge.

Outside of dry fly fishing, any beginner knows that they will eventually have to learn how to use a nymphing rig, but where to start and what sections do they need to worry about?

The most important part is definitely your knots, outside of that depending on how many flies and the depth you are fishing.....this guide should help! If all else fails, buy an Orvis Fly Fishing 101 guide for a few more tips. There are over 100 ways to set up a nymphing rig, this is just one of many to choose from~

Tarpon Fishing Tips! How To Catch Tarpon and Tarpon Equipment 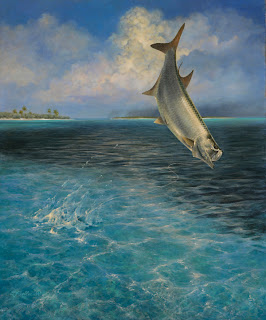 Tarpon Fishing, What To Use, Where To Fish and How To Catch Them...Tarpon on A Fly!

Tarpon, aka Silver King, are one of the most sought after gamefish in the world. While the Florida Keys may boast the highest numbers year round, Central Florida has its share of tarpon too. The Mosquito Lagoon, Indian River, Banana River and Tomoka Basin all hold good numbers of tarpon. The size will vary during the year, with the summer months having the best numbers and the biggest fish. While the average size tarpon in our area is 40-50 pounds, we do get trophy fish that will top the 200 pound mark. Tarpon are known for their aerial acrobatics once hooked and for their ability to destroy fishing tackle. Long, fast, drag screaming runs are normal, and if they are near deep water, they will go down and dare you to try and lift them up. Tarpon have the ability to make even the most seasoned anglers shake. However, a well placed fly, a hungry fish, and good fly fishing tackle, can make for the memory of a lifetime. The Silver King truly lives up to its name and will test your every ability as an angler.
Fly Selection: There is a debate every year, as to what tarpon fly is working best. The argument will usually be about the size, with half of the fishing population wanting big flies, while the other half wants smaller flies. Color is another issue and will vary from location to location. But, here are 12 flies that local guides and our staff recommend using when chasing tarpon in Central Florida waterways:
Deceiver
Crease Fly
Rattle Mullet
Seaducer
Polar Fibre Minnow
Tarpon Bunny
Bubble Head Fly
Enrico Puglisi Tarpon Special
Enrico Puglisi Pinfish
Enrico Puglisi Micro Minnow
Enrico Puglisi Everglades SpecialTarpon Toad
Rod and Reel Selection: Tarpon fly rods and fly reels will be put under extreme pressure. It is necessary to cast bulky flies into some windy conditions and the fish require maximum pressure to have the best shot at landing them. The average fly rod for tarpon will be a 10-12 weight. Fly reels should have a smooth drag system, capable of withstanding long runs and should hold at least 200 yards of 30 pound dacron. Weight forward floating lines work well, but there are times when a full intermediate or sink tip fly line is recommended. 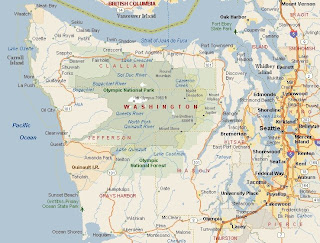 Do I love to Steelhead Fish, you bet, do I get to go much....well that's another question I hope to answer in the next year with a few more trips under my belt again! I've fished the Northwest but only hit a small amount of water, when you think of all the great waterways there, it's overwhelming!
Whether you're cruising through Steelheader Net, Steelhead University, or Blogs about Steelhead, we've all been there. Reading articles on Winter Steelheading, Top Steelhead Flies, or the Top Steelhead Locations, there is a ton of info out there to get your hands on! Give us a report if you make it out this Spring for a few, can't wait to call in some favors from some buddies out that way and get on some beasts.

Need An Update on Some Top Fishing Areas, Look No Further......

Bighorn River Report
March 21, 2009
River flows have been maintained at 2450 cfs to this point. The snow pack is anywhere from 87% to 102% of average depending on where you measure in Wyoming. The reservoir is at 87.6% full.

Spring is officially here. Temperatures for yesterday and today have been in the 70's. This warmth should help bring up the water temperature a little bit. Right now the water temperature is averaging 38 to 40 degrees on the top thirteen miles. There are midge hatches everyday and baetis hatches on cloudy days. But most of the trout are not rising yet. This is attributed to the very cold water. The fish do not want to move far for an insect. However, as water temperatures rise, the trout will too. We have been mostly using nymphs because that method has been the most effective. Yesterday all I used was a size 18 Ray Charles (sow bug) and a size 20 midge pupae. Baetis nymphs will also work in black or olive and streamers continue to work.

I have probably said this a million times but the fish are taking the fly SUBTLY. Yesterday I set the hook instinctively many times and did get a lot of hook ups. I have told this to my clients many times that the trout don't actually bite a nymph. They gently put it in their mouth. This translates to your strike indicator hardly moving or not moving at all. The only time your indicator really moves a lot is when the fish tries to eject our imitation and the hook gets stuck in its mouth somewhere. Trout can take a fly into their mouth and eject it in about half a second.

Flushing Flow Update.........We talked to the Bureau Reclamation today and the flows are now slated for March 30th thru April 3rd. 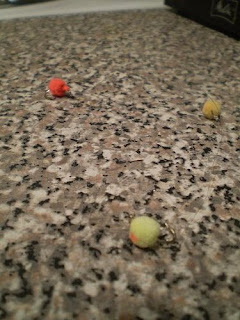 The Eggs Benedict Pattern is What To Use Spring and Fall
No this is not your typical breakfast, this is a gourmet meal coming down the River and very hard to resist!

It was derived from a trip we had 2 years ago to the Grey Reef and some may ask? Did it work? Well, we're still using it and though many Big Trout may get easily confused, a 27" Grey Reef beast fell victim and it keeps me using it every Spring/Fall until they outlaw it!!

What Egg Patterns should you use? Here's a few but my best tip is to use 3 varied colors for that water spread out 12-14" apart. Sizes and colors always change depending upon the spawn cycle, but the result stays the same -Fish On, Now Bring Me Some More Eggs!!

Ethics of Fishing with Egg Patterns