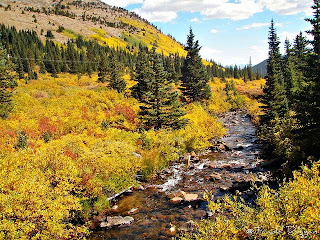 Colorado's Gold Rush is Back Again!

My favorite time has arrived and with it comes a rush of colors that will blow anybody away. I've been lucky enough to have spent the last 4 weekends in the mountains traveling and fishing. Whether down in the Roaring Fork Valley, South Park, Steamboat or the Gunnison River Valley region, I've been absolutely spoiled! 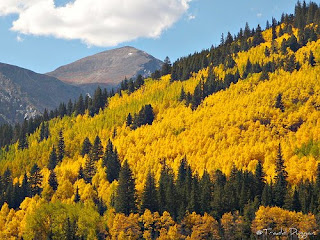 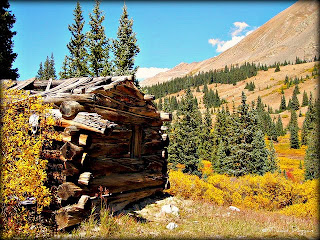 Mosquito Pass had no bugs out on this sunny day, the only thing we found was a nice picnic 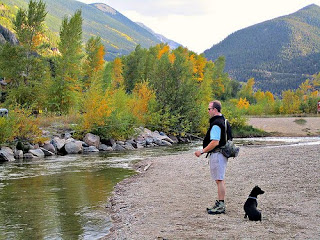 Fishing some of my favorite water with Boca Dawg, lot's browns running up from the lake 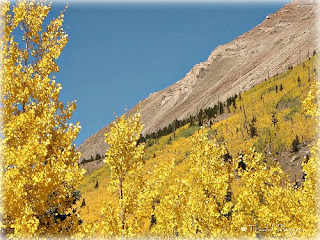 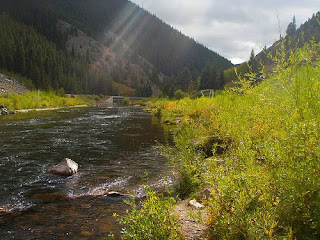 Where I spend every Fall season chasing browns, bring on the BWO hatch 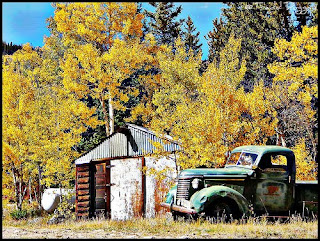 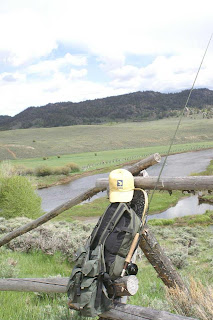 For those that haven't participated in the weekly "Name That River Contest" held by Trout's Fly Shop each week on Facebook check it out! It seems like every Monday I'm checking the page and seeing what rivers show up.

Mind you, most of the pictures can be spread out across the country so it's never a given or something like Cheesman Canyon, oh no. I've been lucky to win a few times and luck plays more of a part than skill often times. I was just able to jump in on this last one before getting beat out or simply, like most Monday's, being clueless.

This week's River shot? The North Platte River. Thanks Trout's and I can definitely use the $25 gift card!! 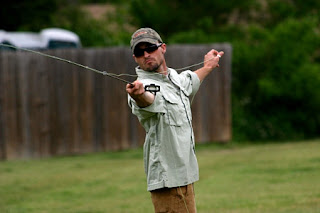 The Colorado River gives up a brown trout to Steve Good of Philadelphia during the America Cup tourney. (Scott Willoughby, The Denver Post )VAIL — Whatever your opinion may be of competitive fly-fishing, there's no arguing the math.

Like most contests, the America Cup International Fly Fishing Tournament that passed through Eagle and Summit counties last weekend was all about putting numbers on the scoreboard. But this trout fishing contest put up numbers unlike any ever imagined in Colorado.

"We ended up with a total fish count for three days of 2,189 scored fish, meaning at least 20 centimeters, or 8 inches, or more. On Friday alone, the fish count was 1,122," said tournament producer John Knight of Minturn. "It's really an anomaly to see these guys pound this water like this. I've never seen fish numbers like this, and I've competed for years."

About 70 competitors from as far as Ireland and Japan took part in the fourth annual event that landed in Vail for the first time and showcased the Colorado and Blue rivers along with Sylvan Lake near Eagle and Nottingham Lake in Avon.

Using the rigid FIPS-Mouche rules of international competition, the anglers were forbidden from using split shot or strike indicators, yet plucked fish from the water like magicians pulling rabbits from a hat, over and over and over again.

"There's tricks to everything," said Rob Kolanda of Littleton, the individual tournament champion and member of winning Team Emerger. "In fly-fishing, everything is 'match the hatch.' But the secret is good presentation. This is about triggering fish, when there isn't necessarily a hatch there to match. It's about triggers within the flies that you are using and the aspects of the fly that catches the fish's attention — is it a bead, is it a particular color, size and shape? It all figures in." 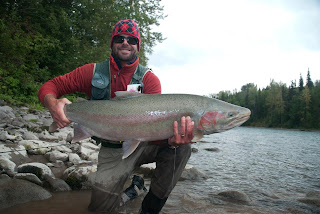 Another tank Skeena Steelhead. This puppy measured 42 X 19 and pushing close to 20 lbs easily! This time of year on the Skeena River is pretty hard to beat. To watch a nice Steelehead video click here

Incredible Fall Fishing At Night, Yes 3am Fishing Can Be Epic! 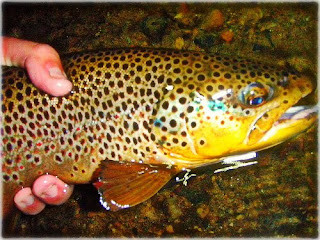 It's that time of year again to hit some incredible Fall fisheries and if lucky enough, to score some sweet brown trout. Fall means many things, to me it's spending quality weekends in the Rockies chasing brown trout and if I'm able, head out on a full moon for some midnight action. 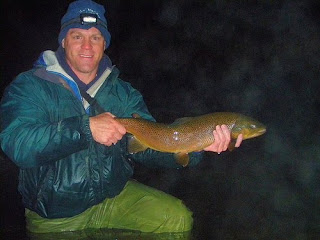 We just spent a nice 3 days on some favorite water of mine and what's even nicer was the fact that we had this hidden water to ourselves. What did we find?

Let's just say that we got there at 9pm and left at 4am....yes it was that good! 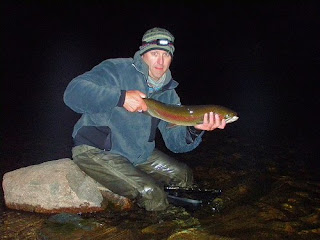 One of the smaller Bows I hooked, a very nice rainbow. I wish I could have landed the 8lbr that got away in the dark of the night. 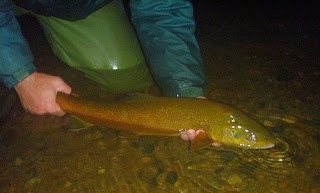 A beast of a Brown came in with a fight but left with a gentle release to play another day. Many hard fights this night, many sore forearms as well from a few battles. 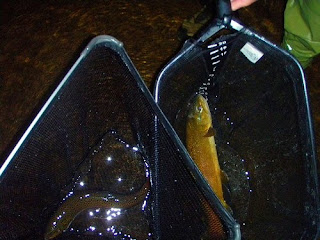 Tandems one after another. Can you say close to 40 doubles that night, yes don't think that will ever happen again as well. It seems everytime I looked over Travis had another and everytime he looked over I had one! 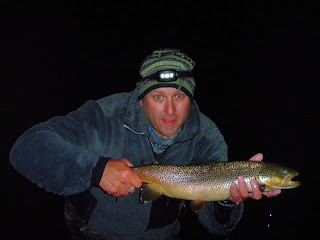 For those of you who need to daydream, think of the most incredible place you could ever fish...this is it! Think of a place that few people frequent, the fish are as pure as they get, the food-wine is as authentic as anywhere on the globe and the people are more than Hospitable!

Site Back, Watch and Let Your Dreams Begin

To find our more about Tres Piedras and your Patagonia adventure, contact me today to get the latest on Patagonia's best Fly Fishing experience. 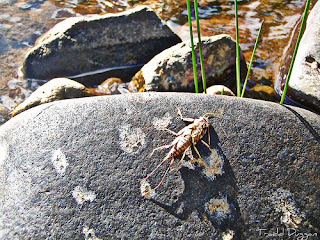 Fall Fishing is Oh So Close

With football and work keeping me busy these days, it was time to get out for a day on the water. Weather started out at 40' and warmed to 70', the perfect weather day to be out on the water. PMD'S, BWO'S, Caddis & Blue Quill, they all showed up today to put on a show skating the water. 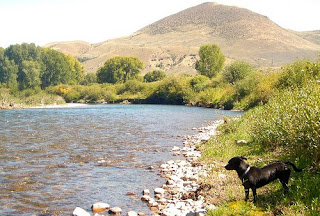 Boca Dawg also enjoyed herself looking for rising fish and a few dips in the water. Whether it's Delaney Buttes, the Frying Pan or around town, Boca always seems to enjoy herself. 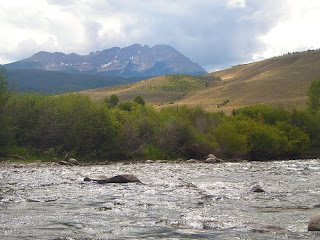 There's no better place than the Gore Range to spend a quality day on the River. Need fish pics? Not going to find it here, today was all about enjoying the day whether I caught 6" rainbows or nothing at all, counting rising fish was much more enjoying than how many numbers filled my net. 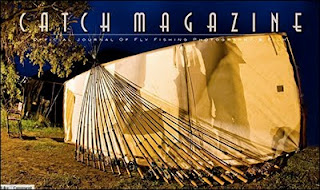 Do you have the latest Brian Okeffe mastery magazine?
One of the best magazines out there is by far Catch Magazine. What makes it so good could be due to the fact that the pictures are incredible, the fish pics are amazing and due to the fact that Brian is just one of the nicest guys out there....that should be plenty of reasons! 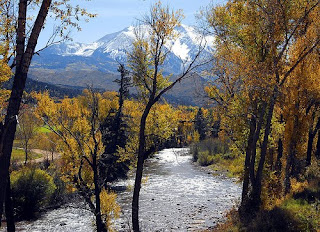 A kayak might be the way to go when fishing in the high country. No, it really doesn't have to end. With you or without you, summer isn't going anywhere. Not just yet, anyway.

Sure, it's Labor Day weekend, that last warm and breezy three-day fling of the season before so many folks pack up the fishing poles and shift their attention to more so-called serious endeavors.

School is back in session, neglected work is piled deep and, well, those grouse and chukars aren't going to hunt themselves. But even as summer winds down and several small-game seasons get underway, some of the finest fishing of the year is just starting to heat up.

Denver's hottest August on record put the kibosh on the bite at several local lakes and reservoirs lately, but things should be looking up now that the nights are cooling and the dog days appear to be behind us. Early morning and late evening will still be an angler's best bets, however.

Black bass will get serious about packing on some pounds soon enough, while wipers and white bass ought to start pushing bait and offering some fast action in lower- elevation reservoirs.

Reports of northern pike activity around weed beds in higher-elevation impoundments like Spinney, Elevenmile, Stagecoach, Taylor and Williams Fork could offer lake fishermen a reason to bring along the camera.

But the best opportunities are likely to be found in the streams, several of which are in the best condition they've been in all year. River flows remain just a bit above average for September, but the fish remain eager and the water is generally cool and clear. The bug buffet is still open as well, featuring a smorgasbord of aquatic hatches and an ample side of terrestrials

Satori is Finally Here! WorldAngling is Back With Another Great Saltwater Video

It's Time For Some Outstanding Salt Action Again

Another trailer for the 2011 Fly Fishing Film Tour production by WorldANGLING. Satori is a film about fly fishing for Permit in the Florida Keys, it is also a Zen Buddhist concept that represents the instant of enlightment; exactly what catching a permit feels like...