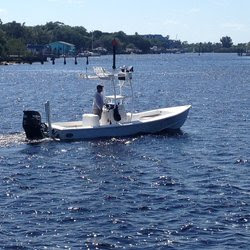 Inshore – The snook bite in the early mornings has been hot lately reports Jeb Grant aka ‘Smokey’ who is our first mate aboard our 5 hour half days. He’s been showing up early to work to soak a hand line for snook under the dock. We use 60lb monofilament and a 7ot circle hook with a live pinfish and let them swim freely under the dock and around the pilings and the snook have been gulping them up within minutes when feeding. The hand line gives you more control and less stretch since the bend of the rod allows the snook lots of room to break you off the hand line doesn’t and also allows us to quickly return the fish without letting him injure himself on the pilings or get over tired. However, we don’t recommend this to first timers it can be dangerous if not properly executed you could end up with torn of fingers or severely cut palms. The tarpon are still being spotted at night all the way till morning. Trout are active around the dock lights and on the deeper water grass flats. The small white bait is plentiful inside the bays and in the passes. It should be getting bigger and better soon and these are what most inshore species are hitting on most often. The mangroves under Johns Pass Bridge are very excited about these bait balls moving through and have been feeding voraciously.

Near shore – The snapper near shore have been biting well when the weather cooperates. Lately the tight gradient of high pressure around our area has been making morning and afternoon weather unpredictable and a bit explosive. These storms play havoc with the barometer and have been making the bite near shore tough and the rides uncomfortable. We are looking forward to a break in this past after this weekend is over. The grouper have been decent on the flat hard bottom when we can get out there to them and today’s ten hour should do well in the deeper near shore waters where the storms don’t have quite the same effect as they do in the shallower waters. Sharks are plentiful this time of year and are being seen and caught in the back bays, on the beaches, in the passes and often near shore. On a recent shark trip we were catching tons of decent sharks but even the four and five foot sharks are being swallowed whole by monster goliath grouper!

Record Catfish Caught On a Fly! 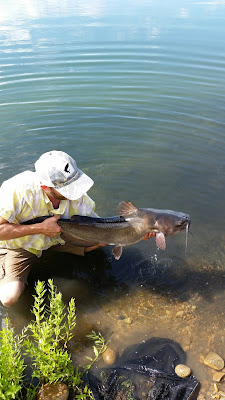 It was one of the mornings that I had to get out and fish. Work has been well so I thought I would go in late after making some casts. I picked a local pond I know well and have fished for a number of years now.

What I didn't expect was to catch a number of fish so easily since it typically fishes off and on here. The morning started with a smallmouth bass on a crayfish pattern than turned to some eager trout, which I will be honest, I had no idea they had them in here.

Than came the moment, the moment when most of us as fly fisherman think about when fishing local ponds, a bite that would take you by surprise! 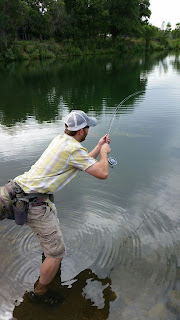 The tug that would change everything. I was actually casting to a few smallmouth bass when I got hit, hit hard by something. I thought it was actually a carp when it grabbed it and I saw a flash however when it didn't bolt like a permit, I knew it was something else. 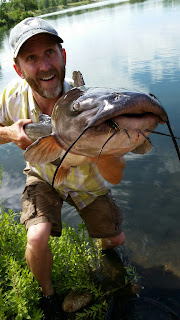 After many attempts to land her as well as assistance from some friends, I was able to end this 20 minute fight on my 5 weight rod and 6lb tippet! 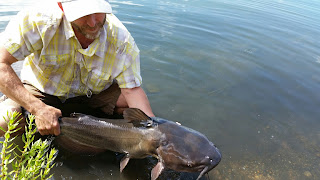 Al in all she went 41 1/2 and weighed 30+lbs pushing my record by 15lbs for the biggest cat I've ever caught on a fly. What a morning and what fish!

Tampa Bound, Time For Some Much Needed Fly Fishing!

Tampa Bay Beach Tarpon on Fly 6/11 from FishbuzzTV on Vimeo.


Headed to Tampa to see the Family and hopefully some long lost Saltwater friends for some fun!

Time For a Move! 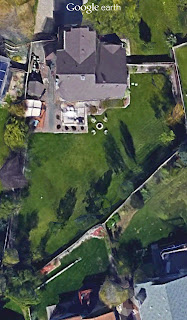 Sorry I haven't been posting much at all lately, busy time packing and moving to our new Casa! Moma wanted a bigger yard for the kids to play in and I wanted more space for my fishing equipment so we made the move to another house here in South Denver's Burbs.

Our yard seems like a 1/2 acre so ample time to yard work but also think about putting in that trout stream I've always wanted in the backyard.

Just kidding but my kids and I will soon enjoy plenty of playtime in the yard as well as my man cave come football season! Boy am I in need of a much needed vacation or at the very least, a weekend fishing at any waterhole this guy will not discriminate at all.

2 Months of packing, selling stuff, painting walls, too many round trips to count and getting the cable hooked up after some delays the cable is hooked up and this guy is headed straight to the hot tub for some chill time!

See you on the water soon...