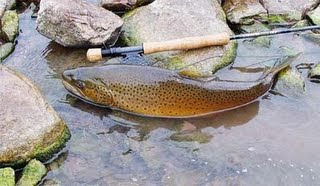 The brown trout is not a native species to NY waters. The brown trout were introduced to NY waters from Europe. The brown trout is able to survive and flourish in warmer waters that other trout species will not tolerate. This is one reason for its growing popularity among the anglers of NY.
The brown trout can thrive in streams or lakes. They can with stand heavy fishing pressure better than the native trout species. The main reason for this is that brown trout are more active at night and can be hard to catch in the daytime. The biggest brown trout are caught after dark, or early in the morning especially during the summer months.
The brown trout will feed on a variety of items. In streams they will feed on snails, crayfish and other small fish species. They will feed on a variety of insects including mayflies, caddisflies, and stoneflies when they are available. In the larger lakes they feed mostly on smelt and alewives. This is why they grow to such large sizes in the lakes.
The brown trout in the Finger Lakes and Lake Ontario experience a phenomenal growth rate. They are able to utilize the colder water and venture in to warmer water that rainbow and lake trout do not feed in. The New York State record brown trout weighed 33 lb. 2oz. It was caught by Tony Brown on a Smithwick Rogue from Lake Ontario on June 10, 1997 aboard Dixie Dandy with Captain Gerry Bresadola.
Spawning for the brown trout takes place in the fall. Each year in October and November the tributaries of the Lake Ontario and the Finger Lakes receive a large run of these spawning fish. Unlike salmon Brown Trout will hit a fly or lure when presented properly. Eighteen Mile Creek, Oak Orchard Creek, Salmon River, Oswego River, Niagara River, Black River, Genesee River, and Maxwell Creek are some of the fall hot spots for fall brown trout fishing.

Man I can't wait to get back there again next Fall for some bruttes.