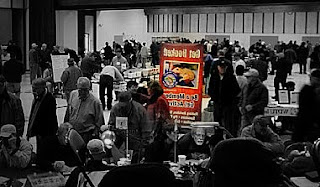 What's a fly tying event without getting together with friends, an incredible buffet of food, too many cocktails and fishing stories a few big fish lies to remember. Another great event this year at the West Denver fly tying show. Every year it seems to get better and better! With all the top names in fly tying there, you're surely able to find some patterns to wow at -whether old or new, many old freinds to catch up with and definitely learn a few new tricks.

A few of us got together for a little Party afterwards at a friend's house, all the guys showed up and the stories began to flow. Whether or not I believed half of them, who cares, they were fun to listen to nonetheless. Talk about bringing out the Southern boy in me with all of that BBQ, cornbread, seafood salads and some incredible fresh sushi platters that a few brought from some of their local sushi hideouts.

A few friend's that showed up included Rick Takahashi "Tak", Tim Mack up from the San Juan River area, Scott Stisser, Gary Okizaki from Blue Quill and a pro staffer for a handful of other companies he updated me on, Mark Mcmillian, Eric Ishiwata, host Brian and lastly, fellow fishing pal Vincent Su.

One good thing about being one of the last ones to leave the party is that you get to take home all of the remaining beer; thank goodness I have a spare refrigerator! Nothing like a Free case 1/2 of beers to keep chilled till our next outing.

Looks like a good time and plenty of great patterns to marvel at. Wish I could have made it.

Plenty of sweet patterns indeed and can't wait to try a few out this Spring. It's always fun to see what new patterns come out every few months and how they work.

That chocolate Ice Emerger is from my vise. You have it unde Mark M.

Juan,
Sorry about the name mixup. I edited to your name and sorry I thought it was his. Great patterns and can't wait to see more patterns from you soon