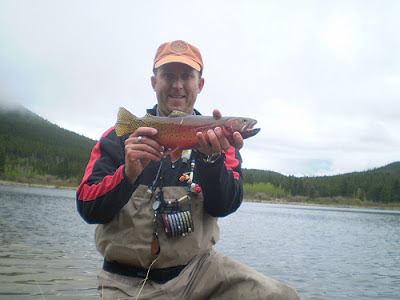 A study unraveling the genetics of Colorado's state fish, the greenback cutthroat trout, has found that pure greenbacks exist only on a 4-mile stretch of a creek southwest of Colorado Springs.

This overhaul of what is defined as a greenback cutthroat may come as a blow to anglers who fished such high-country sweet spots as Rocky Mountain National Park and thought they caught the real thing.

"The only greenback cutthroat trout population that we have now is the one in Bear Creek," said Jessica Metcalf, a University of Colorado post-doctoral researcher who conducted the study.

Federal, state and Trout Unlimited officials digesting the findings Monday said cutthroat trout previously tagged as greenback likely will be renamed. This is a photo of the Greenback Cutthroat Trout from Bear Creek in the Pike National Forest.

The University of Colorado study using DNA analysis and historical specimens also is triggering a federal re-evaluation of the biological status of greenback cutthroats, which are listed as "threatened" rather than "endangered."

And the findings are expected to bolster nascent efforts by conservationists to protect Bear Creek cutthroats in the face of threats from hikers, motorcyclists, homeless campers and partyers who use trails and fragile slopes along the creek — a tributary of the Arkansas River.

"We've known for some time that the trout in Bear Creek were unique," said Doug Krieger, senior aquatic biologist for Colorado Parks and Wildlife. "But we didn't realize they were the only surviving greenback population."

Posted by Troutdawg at 11:11 AM
Email ThisBlogThis!Share to TwitterShare to FacebookShare to Pinterest