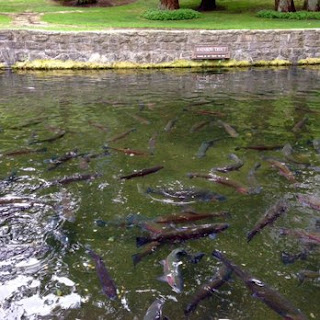 The Oregon Department of Fish and Wildlife alerted the public Friday to the deaths among its summer steelhead stock, blaming an historic drought that has heated the Umpqua's water and allowed pathogens to thrive.

The deaths mark a second catastrophe this summer at the hatchery, which lost its entire spring Chinook stock in June after a clogged intake pipe blocked their access to water.

Jessica Sall, a spokeswoman for the state fish and wildlife agency, said agency officials do not belief the two incidents at Rock Creek are related, or linked to practices or equipment at the facility

Had the similar problem with the fish at the Nimbus Hatchery. Some how they pumped in tainted water and killed 150,000 trout. Put that on top of closing the hatchery last year and it's been a dismal trout year and will probably be bad next year too.