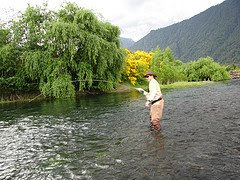 This article explains the biggest mistakes people make fly fishing. These suggestions specifically relate to nymph fishing because fish feed below the surface 90% of the time!
Mistake #10: * USING THE WRONG FLIES * This is an obvious one in any fly fishing scenario. Basically, if your fly matches what the fish are eating, you will catch fish, and if not, you more than likely won't. The first thing that you should do before you start fishing is look at what bugs are in the water.

Mistake #9: * CHANGING FLIES TOO INFREQUENTLY * If you are not catching any fish on your current pattern, than change your fly! There are tons of fish in most rivers and most of the time they are willing to feed. If you are not getting any hits then change your fly (or go a size smaller).
Mistake #8: * CROWDING IN ON THE PEOPLE WHO ARE CATCHING FISH * This is something that really irritates me so much and that frequently happens when I am fishing various rivers. I will be catching fish at a consistent rate while other people around me are not catching anything. Before I know it, people are caving in all around me crowding my space! They wrongfully assume that all the fish happen to be right in front of me and that's why I am catching all the fish!!! Let me tell you something... there are tons of fish in a river, and probably no more fish in front of me than in front of you, so if you see me catching fish and you are not, do not crowd me! That is not the reason you are not catching anything!
Mistake #7: * TOO MUCH OR TOO LITTLE WEIGHT * If the fish are down deep than you need to put more weight on your line to reach them. If they are closer to the surface put less weight on so that your fly floats right past the fish. It is as simple as that.
Mistake #6: * TOO MUCH TIME SPENT WITH YOUR FLIES OUT OF THE WATER * The fish are in the water. If your fly is not in the water you will not be catching fish. When fly fishing, you want your fly to be in the water as much of the time as possible. Too many people spend way too much time with their flies out of the water cleaning off the algae, false casting, undoing tangles, checking out the female angler down river, etc. Obviously you need to make sure that your flies are clear of any algae with some quick splashes on the water surface, but other than that, keep
your flies in the water as much as possible. You will catch more fish.
Mistake #5: * THE "SAN JUAN SHUFFLE" So often you will see people on popular fly fishing rivers shuffling their feet, moving upriver, moving downriver, and basically kicking up a lot of debris and clouding up the water. Keep your feet in the same spot. All you are doing shuffling your feet is kicking up bugs and probably creating a trout feeding frenzy downstream. You want to keep your feet in the same place and hit different areas of the river by casting in differentV spots, not by moving your feet.
Mistake #4: FIGHTING THE FISH TOO HARD On many rivers, you may be fighting 20+ inch fish on 6x tippet and size 22 flies! Don't fight the fish too hard or you will either break the fish off or the fish will slip off the hook. Get the fish on the reel and fight the fish with the reel's drag. If that fish wants to make a run just let it go... there is nothing you can do about it. Ten to twenty minute fights are common when fly fishing large rivers with big fish.
Mistake #3: POOR FLOAT PLACEMENT I have seen folks position their float at the very top of a nine foot leader when fishing in three feet of water because they say that the fish are float shy. Don't do that. Generally, the float should be positioned 1.5 to 2 times the depth of the water. Often times you will have to play with the positioning of the float a bit to get it right. It usually will make the difference between catching a lot of fish and only catching a few fish.
Mistake #2: POOR MENDING You need to have your fly drift naturally with the current. At the same time your line needs to be tight enough that you can set the hook when a trout hits. To accomplish this you need to be accomplished at feeding line and upstream and downstream mends. Without proper presentation you will never catch very many fish. This is one of the toughest things to learn in fly fishing but when you start to get it you will start seeing major results. Ideally you want long, natural appearing drifts with a relatively tight line.
Mistake #1: SETTING THE HOOK TOO HARD OR TOO LATE The number one mistake I see is improper hook sets. Many people jerk up their rod way to hard and tug the fly out of the fish's mouth (or break off the fly.) I see this over and over again and this is a major reason why people don't catch more fish. All that you need to do is gently (but quickly) raise your rod tip when your float goes under. Don't jerk up or attempt to set the hook too hard. Just gently raise the rod tip. Another mistake that people make is falling into a daze because they have not gotten a bite in two hours (because of mistakes described above) and when they finally do get a hit they react too slowly. You have to be quickly (but gently). Many of these skills that I mention above are tough to learn without first hand instruction. My main recommendation is to find a good guide. Once you get better you won't need one any more.

What a great post, it's so nice to hear tips in plain language that don't assume too much knowledge.