Shark Week is Back Celebrating 25 Years On Discovery!

It's that time again to celebrate one of this year's most anticipated weeks on TV..Shark Week! It was close to 20 years ago that I got hooked on Shark week and each year since, I countdown the days till those Great White shark jumps begin. What started was a late night out in August while at the University of Georgia getting home at 1am to turn on the tube and found this amazing Documentary, I didn't stop watching it that faithful night until 6am that morning! I can't stay up that late anymore, but I still max out my DVR each year with shark episodes.

Did I mention that my wife has a complete Phobia of sharks and can't even watch the commercial let alone hear me talk about it, this makes it a little challenging on who get's the remote each night 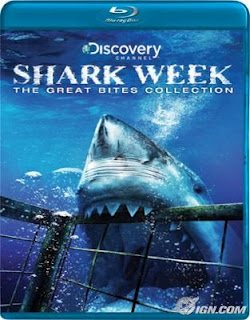 Posted by Troutdawg at 8:52 AM
Email ThisBlogThis!Share to TwitterShare to FacebookShare to Pinterest
Labels: 2012 Shark week discovery channel, great white sharks on a fly

I can't wait for Shark week also here in Florida! My son and I watch it every year when it comes out than he won't go near the ocean for a few weeks.

Kent thanks for your comment and glad you enjoy shark week as well. Plenty of action to sat the least and I actually can't wait to get back out to catch a few again on a fly.