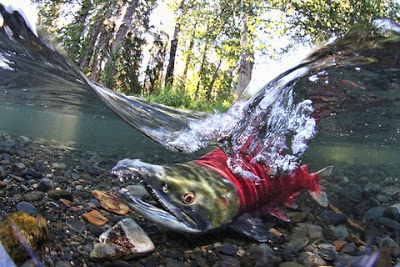 If you missed the NYT's amazing photo gallery of Alaska wild salmon published Sunday, you can check it out here. Photos by Seth Casteel. The one below is of a sockeye on the Russian River near Cooper Landing.


One of the most breathtaking shows in Alaska opens every summer and extends into fall,
when millions of sockeye salmon (known locally as reds) return from their saltwater habitat
to spawn and die in rivers with names like Kvichak, Ugashik and Nushagak. Tourists gather to
watch; bears, ignoring them, eat their fill. The Bristol Bay region is the largest sockeye
spawning ground in the world, and the fish is the state’s most commercially important salmon
species: last year’s catch was worth $296 million. ‘‘When the fish first come in, there’s an
electricity in the air — you can see all the classic things you’ve heard about salmon,’’ l
ike their leaping up waterfalls, says Robert Begich, a biologist with the Alaska Department
of Fish and Game. ‘‘And you can catch some yourself.’’
Julie Bosman

Thank you for all the information that will help me improve my blog.good luck