In Memory of UGA VI! 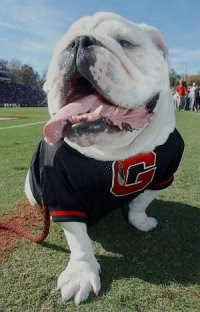 Uga VI, the bulldog that represented the University of Georgia during two Southeastern Conference football championships, died from congestive heart failure at his home in Savannah, the dog's owner said Saturday.At 65 pounds, Uga VI was the largest of the English bulldogs that have represented the school. University officials said the football team also had the winningest record under his nearly 10-year tenure at 87-27.

Uga was known for stalking the sidelines in a shirt with a 'G' on it. During hot football games, Uga would sometimes take a break on a bag of ice."He was a good one," owner Frank W. "Sonny" Seiler said in a news release issued by the university. "What can I say? He had a marvelous record. He was a very strong and healthy dog. He was the biggest of all the dogs, and he had the biggest heart. It just played out."Seiler said he noticed that the 9-year-old dog was breathing heavily at his home Friday night. He gave the dog a bath to cool him off and then headed to his veterinarian where he said the dog "died peacefully."Uga VI became the school's mascot in 1999.

He was the son of Uga V, the only college mascot to grace the cover of Sports Illustrated. He was only 1-year-old when he replaced his father as the public face of the university's athletics.Uga will be buried in a vault in the Southwest corner of Sanford Stadium, where the Bulldogs play their home games, with his predecessors. Private ceremonies are expected early next week.A successor to Uga VI will be announced at a later date.University of Georgia Athletic Director Damon Evans called it "a sad day for the entire Bulldog nation."


My Name is Troutdawg for a reason.....I'm a Huge DAWG fan through and through!!
Posted by Troutdawg at 12:15 AM
Email ThisBlogThis!Share to TwitterShare to FacebookShare to Pinterest