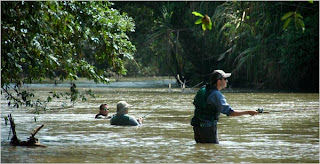 UPALA, Costa Rica — In Costa Rica, there are fishermen, and then there are members of the Club Nacional de Pesca.
Story Link

Dave Sherwood for the New York Times
Sandí holding a machaca, a jungle species that thrives in Central America’s lowland rivers. In my first six months living in the country, I had been content as a fisherman. I had caught wild trout in the mountains, small snook in the surf, even a rainbow-colored guapote in a city park pond in the country’s capital, San José.
Then I happened upon some photos from a tournament the fishing club had held. They pictured wild-eyed men kneeling on the foamy edges of dark volcanic beaches, hoisting 40-pound snook, straddling 100-pound tarpon, all caught on light tackle and from shore, no less.