Spring Fishing in Michigan for Big Fish and Steelhead! 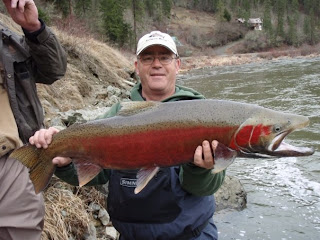 Anglers are getting anxious as we move into open water fishing. Steelhead runs should improve with warmer weather. The sucker runs have started in the Lower Peninsula. Boats are heading out into the Great Lakes for trout and salmon.

Southeast Lower Peninsula
Huron River - Those fishing around the coffer dam are still taking steelhead.
Detroit River - Boat anglers are taking walleye when jigging or handlining up near Gibraltar and the Edison Plant. Orange has been a good color. Those fishing the cuts, canals, and marinas are finding perch.
St. Clair River - A good variety of fish including steelhead, whitefish, coho, walleye, and suckers were caught in the upper river near Port Huron.
Lexington - Lots of perch have been caught inside the harbor but many are small. Keepers are running 7 to 9 inches. Coho and steelhead were also caught on minnows, crawlers and body baits. Boats are trolling planer boards with body baits in 8 to 18 feet of water and taking coho, steelhead, walleye and a few chinook salmon.
Quanicassee River - High muddy water made for slow fishing.
Southwest Lower Peninsula
St. Joe - Good numbers of coho have been caught by those still-fishing with spawn. Steelhead and brown trout were also caught.
St. Joe River - Steelhead and brown trout are being caught by boat anglers fishing along the mud
South Haven - Pier anglers are catching some coho.
Kalamazoo River - Has fair to good steelhead action.
Grand Haven - Pier anglers have caught steelhead and brown trout. Some days have produced more fish than others. Spawn has been the bait of choice.
Muskegon - Pier anglers are catching steelhead and brown trout when using spawn. Some are surfcasting and taking fish.
Muskegon River - Steelhead have been caught up near Bridgeton.
Whitehall - Pier fishing was slow for steelhead and brown trout.

Northeast Lower Peninsula
Ocqueoc River - Steelhead were caught when floating spawn near the launch site or up toward the weir.
Rogers City - Find the warmest water possible which will be very shallow this time of year. Try minnow imitating lures like bombers and rapalas. Bright orange and yellow are good colors to use in stained waters. Most are targeting brown trout and atlantic salmon. Lake trout season does not open until May 1st. Along the breakwall the rocks are dangerous because of ice and snow.
Au Sable River - Steelhead are being caught from the mouth up to Foote Dam when bouncing spawn or wax worms off the bottom. The river was a bit high.
Tawas - Lots of perch are being caught inside the harbor but anglers will need to do some sorting. Pier anglers casting lakeward are getting a few brown trout, walleye and steelhead. Boats trolling with planer boards and rapalas in 10 to 20 feet of water are also catching fish.
Tawas River - Anglers are taking steelhead and suckers.

Northwest Lower Peninsula
Petoskey - Steelhead fishing was fair with fish caught despite the cold weather. Early mornings are best. Locals were taking on average one or two fish per day.
Traverse City - A few boats are making it out on the West Bay and searching for steelhead and perch. Most of the launches still have some ice. The East Bay is ice free so boat anglers are out looking for steelhead, whitefish, and brown trout.
Elk River - Catch rates have been hit-or-miss because so many fish were turning around and heading back out. Fishing will improve once the temperature goes up.
Boardman River - The bite was slow however a couple steelhead were caught.
Frankfort - Pier anglers are catching steelhead and brown trout.
Betsie River - Steelhead fishing has been good and should only get better.
Manistee - Pier fishing has been slow. Boat anglers and those surfcasting will want to look for brown trout in the shallows.
Manistee River - Steelhead fishing is going full bore right now.
Ludington - Steelhead and brown trout action off the piers was slow.
Pentwater River - Good numbers of steelhead can be found in the flats which are located just before the river dumps into Pentwater Lake. Walleye are in the river however the season is closed until the Last Saturday in April.

UPPER PENINSULA
Keweenaw Bay - Anglers are picking up some coho out from the V.F.W. Hall in L’Anse however ice conditions are not good and the shoreline is deteriorating quickly.
Fall’s River - Is low and clear which makes for slow catch rates.
Marquette - Fishing was good for boat anglers in the Upper Harbor. Most are trolling flies or casting jigs with pink twister tails for chinook, coho and steelhead. Those in the Lower Harbor are using spawn bags off the docks at the Power Plant.
Menominee - The ice should be gone soon and anglers will be open water fishing.
Menominee River - Walleye fishing has been spotty. Those wading near Boom and Stephenson Island are still picking up some healthy brown trout when using spawn, yarn and orange lures.
Two Hearted River - Steelhead are in the river.
Manistique River - Steelhead are moving up into the river.

I live in Michigan and can definitely attest as to the fish moving up lately. Fun spring fishing and I will post a few pics for you.

I love to fish up that way but it's been awhile, maybe the next year or so, can't wait!

It was a rough last couple of weeks on the Muskegon River. Scott was able to put a friend of mine and I on the fish though. Croton dam is always a great spot. Females still had eggs in them and had great color. Thanks for the Fishing Report