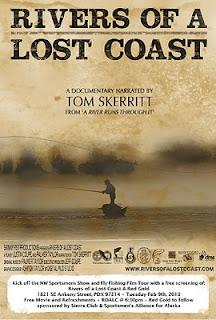 It was another nice day in the Mile High city when I went to get my mail like normally. This day was a little bit different, one that I got a Video I have been waiting on and was super excited to throw into my dvd player to watch this fishing trip-less weekend.

The video this week I was eager to watch was "Rivers of a Lost Coast" and I was not disappointed. I've had many of my friends mention how good this was and after viewing it, it more than met my expectations!

Tom Skerritt returns to fly fishing for the first time since "A River Runs Through It", to narrate this documentary on California's history of coastal fly fishing. This DVD includes the award-winning feature film, never before seen extra footage, deleted scenes and other bonus features. Using never before seen footage, vintage phots, archival headlines and exclusive interviews, Rivers of a Lost Coast shows a side of California most people never knew existed.


With California's growth over the last few decades and with a large increase in fishing, results can often be overlooked as to the damage which takes place in fisheries. Whether the stories told about the dwindling fisheries, logging practices in riverways. There are some inside stories included in the film with Fly fishing legends Bill Schaadt and Ted Lindner. They began the largely Post-WWII as good friends, but later turned enemies due to conflicts. Despite the reasons this prime steelheading region soon had some issues to deal with as well as a fishiung community split.

Rivers of a Lost Coast can be found in many outlets here currently for purchase whether it's your local fly shop or contact them directly.

Posted by Troutdawg at 1:21 AM
Email ThisBlogThis!Share to TwitterShare to FacebookShare to Pinterest
Labels: documentary fly fishing, fly fishing films, rivers of a lost coast

Thanks for sharing...going to have to pick this one up!

It's definitely worth getting and quite the history lesson to be learned as well! I may have to watch it again