In the Land of the Cutthroats - Trailer from Reel Escape Films on Vimeo.

The Wait Is Finally Over

Plenty of good videos to check out this year, no doubt from this class of top videos being selected it looks to be the best one yet! One that is worth seeing over and over again is "In The Land Of Cutthroats". Whether or not you've heard of Nick Clement from ReelEscape Films....you will shortly after the Film Tour Show begins!

Yes I am a fan and truth be told, I am a little biased. I was lucky enough to be in a few of his Saltwater and Trout trailer videos scroll down my blog on the right so there it is! Hopefully I can get back on the water with him soon and notwithstanding my skills to catch fish on cue when needed, we've had some fun trips. The featured Cutthroat video is one I've watched many a times and get's me anxious for some Cutthroat fishing again this year! Nick is one talented Videographer; you must be if you're appointed the position from the Colorado DOW to shoot their hunting/fishing videos as well as being chosen by the Fly Fishing Film tour. Congrats also goes out to our fly tying wiz Brian, who was the featured fly tyer in the video and is definitely not a newby around the camera as well.

The film tells the story of three native trout species that evolved along the Continental Divide in Colorado. From ancient beginnings in tepid coastal waters, the wayfaring cutthroats found their way to the loftiest slopes of the Rocky Mountains and into the hearts of modern fly fishers. After a medley of mountain scenery, cutthroat trout, mayflies, and cutting-edge time-lapse photography, the film takes viewers to a high-mountain lake for action-packed angling for greenback cutthroat trout. 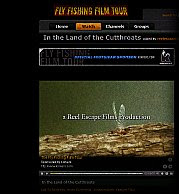 All about the grab said...

for starters It looks visually stunning.....I'd give my left arm to fish in back country like that.Looks a great film.

Absolutely, those backcountry shots and rising trout sequences are pretty incredible. Can't wait to get back up there again myself.

Enjoyed watching that video on Cutthroats, thanks

That video makes me want to move to the Rockies Asap! I'll have to to look for the show coming my way soon hopefully.