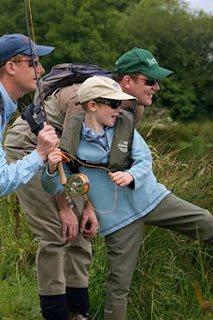 Was It A Good Weekend or Not?

Denver was hit by the Fly Fishing Show wave this weekend and the question that pondered the minds of many Front Range anglers was, "Did this weekend prove to be a positive weekend of fishing overload" or was it a bust due to the fact we had two shows when one could have sufficed?

What happened
For most of those outside of the Denver area may not be familiar with what we had happened this past weekend, we were lucky enough, or in this case, unlucky to have both shows going on at the same time. For those of us that have attended and are friends with the organizers of the Fly Fishing Show, we're not too happy. Nothing like being hijacked by another show in town and especially one that has been talked about as trying to run the FFS out of town for good. I had many close friends that whom either worked for fly fishing companies, Outfitter's, special presenter's or who worked for both events as organizers all agreed this was not a good thing. Whether it was a scheduling conflict due to a ski show or other reasons I will stay away from this topic's underlining reason. Let's just hope next year we can work out the scheduling conflicts.

On a lighter note, The ISE
I was able to enjoy myself immensely from an overdose of fly fishing. The ISE show definitely kept me entertained a few days from meeting up with old friend's and meeting new one's (can't wait to call in those favors to my new guide friend's in warm places). What's a fly fishing show without catching up with friend's like Brian O'keefe, the founder of Catch Magazine. Brian always jokes with me, whether it's about attending his events or how I like to follow his travel itinerary's, hey what can I say I like to follow his fly fishing destinations and learn more photography skills. He did comment on how great of issue their recent one was with friend's Corey Kruitbosch and Bryan Gregson for Catch Magazine, he said it's one of their most popular ones to date. I also caught up with another pal that has taken fishing websites to another level. Tim "Fishman" Emery, an old friend from my Denver TU days, has taken the FishExplorer site to a league of their own. Tim was telling me about how busy they've gotten now that they reached close to 15,000 subscribers, that's a far cry from the days of me running the Denver TU site and the traffic we got from that.

Another highlight of the ISE was catching up with Nicole Darland from Xclusive Xpeditions, if I have to explain who she is you need to check yourself at the door. Nicole holds the reigns as one of the premiere fly fishing women in our sport today sorry Cathy beck . Whether it's her time spent traveling the globe, spending years in Patagonia, or from her recent hit show "Fly Fisherman". I had met her the last few years at some shows but we made it over to her in request of my buddy Dave whom has been emailing her some and definitely wanted to drop by and say hello. Kelly Galloup is a treat each time I run into him. I met Kelly years ago when fishing up on the Madison River and the time spent with him than chatting to the present fly fishing shows, he is up there for me as the go to guy for streamer fishing. I picked his brain for about 20 minutes about some tandem streamer fishing, my bread and butter and the knowledge this guy has for not only streamer fishing, but for story telling makes me laugh just thinking about it. Thanks for the invite again and I look forward to seeing you in August when I return to the Madison and checkout the new renovations at the Slide Inn. Among other's catching up with and worth checking out their site's included: Kirk Deeter from FlyTalk-Field & Stream, Jack Dennis, Brad Befus , and Denny Rickards. Taking earplugs next time, between the duck calling and loud bugling elk calls, it gets pretty loud in there.

The Fly Fishing Show
The Fly Fishing Show provided plenty of entertainment as well but let's face it, most of the speakers that normally present at this, left to do the ISE instead so though there were some good speakers, it was not as jam packed as normal. We did however get to see a number of good presenters and catch up with friends at booths there. The first and most important stops were to see how my pals were doing at the Celebrity tying areas. From what I heard from other friends days prior, a few of them had been mobbed from all of the admirers standing to learn some new patterns. Brian Y always draws them in, Rick Takahashi is still one of the most popular draws, well when you have a popular new midge book out that helps a little. Vincent Su still has people inquiring about his 720 vise, Casey Dunnigan got some attention as well and not bad for being his first fishing show to showcase your new patterns, nice going. Travis Best also brought in the crowds with some new killer patterns and skills to go along.

Rob Provost from Grand Slam Fly Fishing also provided some great tips on fishing Hawaii for bonefish, who would have thunk?? Great recap and boy how you keep me entertained each week on facebook with all of your global travels. Dave Whitlock is still one great guy to catch up with and whether you love his artwork, enjoy talking bass or carp fishing, or simply sit back and relax to some fishing stories; Dave will always be one of the best guys around in the fishing industry for knowledge and friendly conversation! Don't forget to ever stop by The Angling Bookstore to catch up with Ben Furimsky -his dad Chuck started this great event, for some new books out or fishing videos. Ben's a great guy and one heckuva fly tyer. My Pal Kyle Perkins from Compleat Thought also did a great job helping out this week with Save Bristol Bay Group and the Red Gold showings. Great job and I hope more awareness was brought to this important organization that needs all the help they can get. Still one of my favorite shows, I just hope next year bounces back and brings back some old faces again to catch up with.

I wish ours was a bit earlier here in Salt Lake, we still have 2 months to go. Sounds like a weird weekend in Denver for competing fishing shows.

Ours hit the perfect Lull period in the winter time. Fun weekend just not too happy the FFS got the short end of the stick this past weekend.