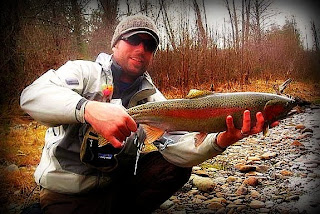 While many are escaping the Winter doldrums and headed down to the Florida Keys or Patagonia, look no further than California for some sweet winter steelhead fishing. My fishing partner in crime Tim, got the last minute call from a few friend's and was out the door before he could even think about answering the question. Lucky Dawg! Well for someone who is married and had a new addition "Fishing partner" added to the family last year, I'm sure the trip was a nice break from everything.

Trinity River
What and Where? The Trinity River is a major trib to the Klamath River that stretches 100 river miles from Lewiston Dam downstream to its confluence with the Klamath at Weitchpec. The entire river is almost designated as wild and scenic (limiting river traffic and keeping it as natural as possible), flows through the Shasta-Trinity National Forest, Six Rivers National Forest, and BLM land.

This great River is arguably one of the finest steelhead streams in the West. Its runs of these fish were nearly decimated when Trinity and Lewiston Dams were completed in the 1960s, but recent restoration efforts along the river (Trinity River Restoration Program) have brought the steelhead back by the thousands, and recent years on the Trinity have boasted some of the finest runs and greatest steelheading in decades.

Fish Info and Seasons
When to go? Really anytime you can but the prefered timeline is typically between September through February. That and depending on what the weather, water and fish are doing to have success. The avg size of a Trinity River steely ranges from four to eight pounds, while mature adults measuring over ten pounds are hooked on a regular basis. In addition to the steelhead, anglers on the Trinity River have the opportunity to hook into fresh Chinook and Coho salmon, and even sea-run brown trout. Whereas a great week of steelheading on most rivers can mean one or two fish hooked, our Trinity River guides regularly hook multiple fish nearly every day of the season. 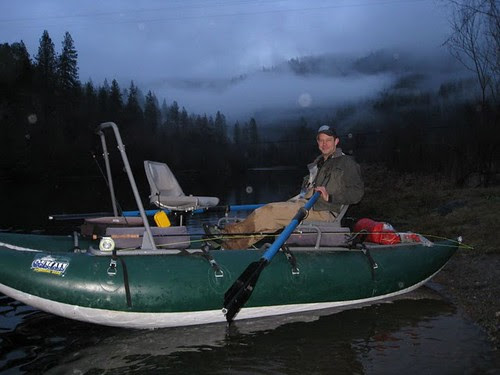