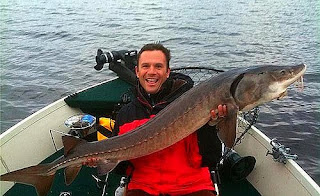 Whether It's Big Bass On a Golf Course or Sturgeon in Brackish Water You're After, I'm All Ears
It's a boring Wednesday and I'm working another long day, all I want to do is to talk a little fishing and to see how the fishing's been in Minnesota lately so I call my Pal Clark. Wouldn't you know it I get his voice mail saying he's out of the office again....hmmmm I wonder where's he's at. Rough life being a Real Estate broker and my only guess is that he's out fishing again to beat working. Two days later I get the email full of pictures of nice Sturgeon, which all I can do is to inquire Where, When, How and What??? He calls me back to tell me about an undisclosed area (I'm sworn to secrecy) he's been sturgeon fishing a bunch lately since trout season is closed and all I can say is, when can I get on a few of those pigs! Growing up in Georgia we also had a few flying Sturgeon down South that were of the airborne strain that would fly over your boat as you floated down the Suwannee, but nothing like this. In fact these are relatively small when compared to the monsters I've seen coming from Hell's Canyon Idaho and in the Pacific Northwest, but nonetheless I wouldn't complain catching one. Now all he has to do is to call my other buddy Cobos who also lives in Minny, to get out on a few since he's the exception to these guys, he's the token 60 hour a week worker that needs to get our more than anyone.

My other Pal is also a hard working self employed fishing junkie...see a pattern and why I'm also self employed! Each weekend I call my buddy Don to see which golf course he's hacking away at and which water he's fishing. This weekend was no exception, seeing how his Auburn Tigers are choking this year there's no excuse not to be out around Atlanta enjoying some outdoor interest. I guess since he was short on time he decided to combine the two of golf and fishing into one with the final tally being a good one! Some nice 6-8lb bass caught on Atlanta's Piedmont driving club, nothing like catching big bass while people are yelling Fooooooooooouuuuuuur in the background. Nice going Donny B and save a few for me on my next trip back home.